Two Honorary Prize Recipients were also announced and acknowledged for their groundbreaking work in mental health. They are: Clubhouse International and Sean Mayberry, founder of StrongMinds.

“The 2022 Pardes Prize recipients personify the deep knowledge and understanding of human behavior and the compassion for people suffering from mental illness with limited access to needed services,” said Herbert Pardes, M.D., President of the Brain & Behavior Research Foundation’s Scientific Council and Executive Vice Chair of the Board of Trustees at NewYork-Presbyterian Hospital. “We applaud their groundbreaking work and honor their service.”

“These talented and accomplished leaders are striving to expand the reach of mental illness treatment here in the U.S. and around the globe. They serve as extraordinary advocates for mental health and inspire us all to use our knowledge toward the greater good for all humanity,” said Jeffrey Borenstein, M.D., President & CEO of the Brain & Behavior Research Foundation.

2022 Pardes Humanitarian Prize Recipient Altha J. Stewart, M.D.
Dr. Altha J. Stewart has dedicated her career to helping the most disadvantaged and underserved people in our society who are living with serious mental illnesses.

Dr. Stewart is a longtime advocate for better behavioral and mental health services for young people. Her work with the Center for Youth Advocacy and Well-Being aims to promote a trauma-informed culture that focuses on preventing violence and trauma to children, providing help to children exposed to violence, offering peaceful options for resolving conflict, and creating a climate that supports children and fosters collaboration among service providers.

2022 Pardes Humanitarian Prize Recipient Robert van Voren, FRCPsych (HON)
Robert van Voren has dedicated his life to the cause of human rights and mental health. For 45 years his dynamic leadership and global efforts have provided direction and practical support for making human rights a strong pillar of how societies deal with people living with mental illness. Over the years, he has protested injustices faced by patients, sided with those who fight for human rights, and exposed systematic abuse of psychiatry, at a substantial risk of harm to himself.

During this time of humanitarian emergency work in Eastern Europe, Professor van Voren’s zeal is evidenced by his efforts in Ukraine and neighboring countries, where he has organized mental health services for people impacted by the war and supplied essential medicines and supplies to institutions that house persons with mental disorders.

As a leader and professor, he has also created countless initiatives and activities for schools, workshops, training seminars and advocacy campaigns. He has established and restructured mental health services, documented human rights abuses, and has given voice to people with mental illnesses.

The Pardes Humanitarian Prize in Mental Health, which carries an honorarium of $150,000, is awarded annually to recognize individuals whose contributions have made a profound and lasting impact in advancing the understanding of mental health and improving the lives of people who are living with mental illness. It focuses public attention on the burden mental illness places on individuals and society and the urgent need to expand mental health services globally. Established in 2014, the Pardes Prize is named in honor of Herbert Pardes, M.D., the internationally renowned psychiatrist, outspoken advocate for the mentally ill, and the award’s first recipient.

2022 Pardes Honorary Prize Recipient Clubhouse International
For more than 25 years Clubhouse International has pioneered the recovery concept for people living with mental illness, putting into practice their active participation in their own recovery process, a model that has been endorsed by governments, civil society, and professionals globally.

Built upon the belief that every member has the potential to recover from the effects of mental illness and lead a personally satisfying life as an integrated member of society, Clubhouses, now numbering 320, are comprised of communities of people who are dedicated to one another’s success, no matter how long it takes or how difficult it is.  Clubhouse offers people living with mental illness opportunities for friendship, employment, housing, education, and access to medical and psychiatric services in a single caring and safe environment. This social and economic inclusion is a model of care that helps lower trends of higher suicide, hospitalization and incarceration rates associated with mental illness.

2022 Pardes Honorary Prize Recipient Sean Mayberry
While working in Africa implementing HIV/AIDS and malaria programs, Sean Mayberry, a former diplomat and social marketer, saw firsthand the challenges of millions of women with mental illness. He was determined to find a solution. In 2013, he came across a Johns Hopkins University study that showed remarkable success in treating depression in individuals in Uganda using Group Interpersonal Psychotherapy (IPT-G), facilitated by lay community health workers. The potential of this simple, low-cost intervention inspired Sean to quit his job and start a new organization called StrongMinds, to provide depression treatment to women in Africa, most with no access to effective treatment.

Since its founding, StrongMinds has treated depression in 150,000 women and adolescents in Uganda and Zambia. On average, over 80% are depression-free following therapy. Through Sean’s inspirational vision, StrongMinds has proven that IPT-G is a simple, cost-effective way to scale access to depression treatment for underserved populations. IPT is now a WHO- recommended first-line intervention and is being delivered in many countries.

About Brain & Behavior Research Foundation
The Brain & Behavior Research Foundation awards research grants to develop improved treatments, cures, and methods of prevention for mental illness. These illnesses include addiction, ADHD, anxiety, autism, bipolar disorder, borderline personality disorder, depression, eating disorders, OCD, PTSD, and schizophrenia, as well as research on suicide prevention. Since 1987, the Foundation has awarded more than $440 million to fund more than 5,100 leading scientists around the world, which has led to over $4 billion in additional funding for these scientists. 100% of every dollar donated for research is invested in research. BBRF operating expenses are covered by separate foundation grants. BBRF is the producer of the Emmy® nominated public television series Healthy Minds with Dr. Jeffrey Borenstein, which aims to remove the stigma of mental illness and demonstrate that with help, there is hope. 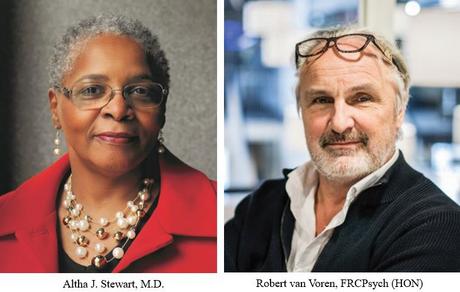