International Organization Honored for Visionary Commitment to Mental Health Care for Refugees and Victims of Violence, Epidemics and Disasters 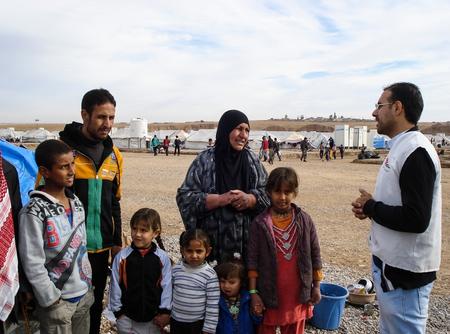 for its visionary and pioneering work

health care to people facing crises across the

globe. The award was announced today by

and will be presented at a ceremony in New

patient, or performing an emergency cesarean section. But for more than 20 years, MSF has also been providing vital psychiatric and psychological care to people ravaged by man-made or natural disaster. The organization currently has mental health related programs in 41 countries across five continents treating adults and children who are victims of armed conflict, natural disasters, sexual violence, neglect, psychiatric disorders and disease outbreaks.

Dr. Herbert Pardes, President of the Brain & Behavior Research Foundation’s Scientific Council and Executive Vice Chair of the Board of Trustees of New York-Presbyterian Hospital said, “In so many corners of the world, people are facing horrific violence, displacement, abuse, disease, and stigma. All too often, while addressing their urgent physical needs, we forget their equally urgent need for mental health care. Doctors Without Borders/Médecins Sans Frontières is a powerful force providing mental health services for people in desperate circumstances who have no other source of assistance or therapeutic intervention.”

He added, “Through their tremendous work at the frontlines, in often dangerous and volatile areas of the world, the physicians, nurses and staff of Doctors Without Borders/Médecins Sans Frontières have time and again given us an unwavering example of what it truly means to be a humanitarian.”

Restoring the Body and Mind
As the foremost organization dedicated to providing emergency medical aid in humanitarian crises, MSF intervenes particularly where there is a lack of mental health services in areas afflicted by natural and man-made disasters, and as integral to acute medical care. Disasters occur suddenly causing intense feelings of fear and helplessness. People commonly confront extreme destruction and chaos, including loss of lives and belongings. Depression, PTSD, anxiety, suicidal behavior, and crippling fear often result. Mental health care increases the likelihood of successful medical and psychological treatment and is a vital component of programs treating HIV/AIDS, tuberculosis, malnutrition, and non-communicable diseases.

The first MSF mental health interventions were in Armenia in 1990 after the devastating earthquake there. In the 1990s, mental health programs were initiated in Gaza, the Balkans and in Eastern Europe. In 1998, MSF formally recognized the need to implement mental health and psychosocial interventions as part of its emergency work.

Today, MSF mental health programs reach thousands worldwide. Among them are Syrian children at a hospital in northern Jordan, typhoon survivors in the Philippines, survivors of sexual violence in Haiti, cholera victims in Yemen, and displaced people worldwide, including in Iraq, Lebanon, Italy, Mexico, Tanzania, and Sudan.

Since 2012, MSF has been providing medical and mental health care to tens of thousands of migrants and refugees fleeing El Salvador, Honduras and Guatemala, known as the Northern Triangle of Central America. To raise public awareness of the devastating global refugee crisis, MSF has launched an exhibition titled Forced From Home, which exposes the conditions facing more that 65 million displaced people worldwide. Recognizing that the long-term psychological impact of humanitarian crises are frequently underestimated or undertreated, MSF plans to expand its mental health programs around the globe.

“This award is a tremendous honor, both as a recognition of the work of MSF, but especially of the needs of our patients and the crucial role that mental health support can play in helping to heal people in crisis,” said Kaz de Jong, mental health specialist for MSF. “It is our sincere hope that this award will shine a light on the immense mental health needs faced by people dealing with the scars of war and conflict, forced migration, sexual violence, the isolation of psychiatric disorders and the stigma of devastating diagnoses such as HIV and tuberculosis.”

About The Pardes Humanitarian Prize in Mental Health
The Pardes Humanitarian Prize in Mental Health was established in 2014, and is awarded annually to recognize individuals or organizations that are making a profound and lasting impact in advancing the understanding of mental health and improving the lives of people suffering from mental illness. It focuses public attention on the burden mental illness places on individuals and society, and the urgent need to expand mental health services globally. Nominations are solicited worldwide. The recipient is chosen by a distinguished committee of eleven members and receives an honorarium of $300,000. The Prize is named in honor of Herbert Pardes, MD, a noted psychiatrist, outspoken advocate for the mentally ill, and the award’s first recipient.