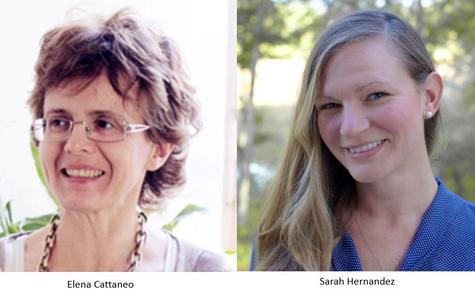 The Gehry Prize is presented annually to recognize an outstanding scientist whose originality, spontaneity, precision, and rigor have advanced the search for treatments and cures for the fatal genetic disorder Huntington’s disease (HD) and for other brain disorders. The award was created by the architect and founding Board member Frank Gehry and his family in memory of his late daughter.

The Wexler Prize is awarded annually to a Huntington’s disease researcher who is early in his or her career and whose work reflects the highest caliber of excellence, diligence, and creative thinking. The prize honors Nancy Wexler, President of the Hereditary Disease Foundation.

“Research to find treatments and cures for Huntington’s disease is bringing hope to families around the world who are impacted by this devastating disorder,” says Meghan Donaldson, CEO of the Hereditary Disease Foundation. “We applaud Elena Cattaneo and Sarah Hernandez for their extraordinary work and thank them for their commitment to scientific exploration that is breaking down barriers and leading to discoveries.”

Elena Cattaneo received her doctorate in Biotechnology Applied to Pharmacology from the University of Milan and is now leading a laboratory there focused on understanding the physiopathology of Huntington’s disease. Her goal is to develop pharmacological, genetic, and cellular strategies that slow down the course of HD or prevent its onset. Her laboratory works with HD clinical experts in Italy and globally to assess the diagnostic and therapeutic potential of research findings for clinical translation and application. She is also the co-founder and director of UniStem, the University of Milan’s coordinated center on stem cells which promotes access to information on the study of stem cells to a network of over 100 universities and research centers internationally. In 2013, Professor Cattaneo was appointed a Senator for Life by the President of Italy in recognition of her activities as a champion of science.

Sarah Hernandez received her doctorate in Biology and Biotechnology from Worcester Polytechnic Institute and is currently receiving funding from the Hereditary Disease Foundation for her work on understanding how connections between cells can affect permeability of the brain in Huntington’s disease. She decided to become a scientist at the early age of 13 and later learned that Huntington’s disease was in her family.

About the Hereditary Disease Foundation
The Hereditary Disease Foundation (HDF) facilitates collaborative and innovative scientific research to further the understanding of Huntington’s disease, a genetic disorder that strikes in early- to mid-adulthood, destroying brain cells and causing irreversible decline in control of mood, memory, and movement. There is currently no cure. As a disease caused by a mistake on a single gene, Huntington’s disease serves as an ideal model for understanding other brain disorders. Research organized by the Foundation led to the discovery of the genetic marker for Huntington’s disease in 1983. HDF organized and funded a decade-long international collaboration of over 100 scientists who discovered the gene that causes Huntington’s in 1993. This work played an important role in the development of the Human Genome Project.