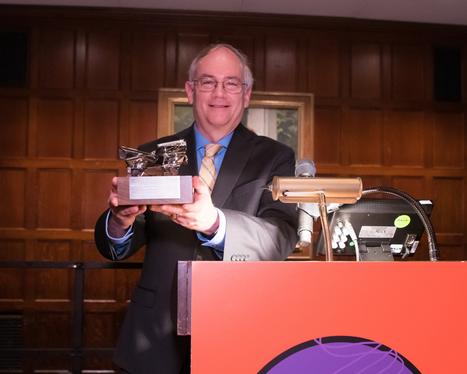 NEW YORK  (Nov. 6, 2019) - The Hereditary Disease Foundation (HDF), which is dedicated to funding research to cure Huntington’s disease (HD) and impact other brain disorders, raised $1 million to benefit innovative scientific research at its Celebrating Discoveries in Neuroscience Symposium and Gala on October 28 at the Harvard Club. The 2019 Leslie Gehry Brenner Prize for Innovation in Science was presented to Dr. Scott Zeitlin, associate professor of neuroscience at the University of Virginia School of Medicine. The evening was hosted by Lesley Stahl, 60 Minutes, CBS News correspondent. The keynote speaker was Dr. Cori Bargmann of the Chan Zuckerberg Initiative. The Emmy award-winning journalist and HD Advocate Charles Sabine was a featured speaker.

​Dr. Nancy Wexler, President of the Hereditary Disease Foundation, said, “We thank our generous and visionary supporters for their continued commitment to funding creative and game-changing scientific research. Their support enables us to provide funding to brilliant scientists who have turned concepts in the laboratory into clinical trials that are changing the lives of Huntington’s disease patients and their families. The cure is within our grasp.”

Dr. Zeitlin was awarded the Gehry Prize for his work to understand the structure and function of the Huntington’s disease protein and to develop new therapeutic strategies.

Each year, HDF presents the Leslie Gehry Brenner Prize for Innovation in Science to support a scientist who exemplifies qualities of inventiveness and imagination in science. The annual award of $100,000 was created by HDF founding director and world-renowned architect Frank Gehry and his family to honor the memory of his late daughter, a gifted artist, painter, photographer, and filmmaker.

The Hereditary Disease Foundation
The Hereditary Disease Foundation is committed to funding innovative research to cure Huntington’s disease (HD) and impact other brain disorders. The Foundation focuses on curing Huntington’s disease and its devastating consequences to individuals and families with the disease. Since HD is caused by a single gene, it serves as the model to potentially unlock cures for more complex brain disorders like Parkinson’s, Alzheimer’s and Lou Gehrig’s (ALS) diseases. Research organized by the Foundation led to the discovery of the genetic marker for Huntington’s disease in 1983. The Foundation organized and funded a decade-long international collaboration of over 100 scientists who discovered the gene that causes Huntington’s in 1993. This work played an important role in the development of the Human Genome Project.

Huntington's Disease
Huntington’s disease is a dominantly inherited, neurodegenerative disease causing irreversible decline in control of mood, memory, and movement. There is currently no cure. Each child of an affected parent has a 50% risk of inheriting the same lethal affliction. Huntington’s disease usually appears in the prime of life – age 30-50 – but it can strike as early as 2 or as old as 80. It is invariably fatal over a 10-20 year, unremitting course. Most individuals in the late stages of illness require enormous assistance. They lose the ability to walk, talk, and feed themselves, but are still aware of themselves and their families.