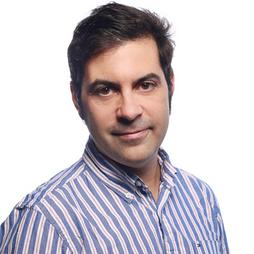 in which people are not limited by their visual

President and CEO of Lighthouse Guild.

Javier Pita Lozano, we are supporting the

development of new technologies that make

navigating through everyday life easier and

more fulfilling for people who are blind and

made a remarkable contribution to the field, and

we look forward to seeing his future work."

The NaviLens system uses improved QR technology with a new type of code made up of four colors that enables it to provide more information than a black-and-white QR code. Using a smartphone, the NaviLens app scans the area. Once it picks up the unique NaviLens code, the app provides the embedded information audibly to the user along with their distance/directionality from the code. As long as the code appears anywhere in the field of view of the smartphone camera, the code is detected, and information is delivered.

NaviLens is more accurate than GPS technology because it considers smaller distances that are crucial to navigation for people who are visually impaired. NaviLens codes can be read from a much greater distance than QR or bar codes, and at a 160-degree angle. It can also be used indoors and in environments where GPS is not available.

Any place can adopt the NaviLens technology to improve the space's accessibility using patented artificial markers called ddTAGS developed with the collaboration of the University of Alicante (Spain). ddTAGS are superior in many ways to QR codes because they can be scanned instantly from up to 40 feet away with any smartphone camera, in full motion without the need to focus or frame it.

“We began in public transportation because for us and the users on our team, it is super important to make public transportation more accessible,” said Mr. Pita Lozano. “I am honored to be the recipient of the 2022 Pisart Award. I share Lighthouse Guild’s commitment to improving the lives of people who are vision impaired and look forward to further advancing our technology to increase autonomy, social inclusion and quality of life.”

Recent advances to the NaviLens technology include a 360-degree Augmented Reality technology that will register and retain the user’s location and guide them to the destination even if they lose contact with the code. In addition, the NaviLens GO app can help users navigate indoor spaces, such as retail stores, and to locate items in the store.

About the Pisart Award
The Pisart Award was established in 1981 to recognize an individual, group of individuals or organization that have made significant contributions to the field of vision science. The award has evolved to recognize those whose technological innovations have substantially improved the lives of people with vision loss. Their efforts will have directly contributed to the mission of Lighthouse Guild to inspire people who are visually impaired to attain their goals.

As the 2022 Pisart Award winner, Mr. Pita Lozano will receive a prize of $25,000 at Lighthouse Guild’s symposium this fall, where he will present his work and its role in addressing the needs for people with vision loss.

Lighthouse Guild
Lighthouse Guild provides exceptional services that inspire people who are visually impaired to attain their goals. Our podcast series, “On Tech & Vision with Dr. Cal Roberts” offers information and insights about technological innovations that are tearing down barriers for people who are blind or visually impaired. For more information, visit Lighthouseguild.org.