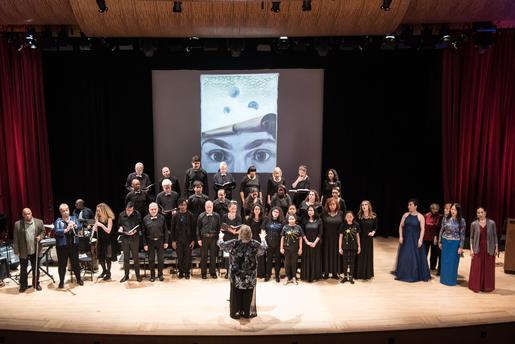 NEW YORK -- The worlds of art, music, and poetry will come together as students, who are blind or visually impaired, from Lighthouse Guild’s Filomen M. D’Agostino Greenberg Music School perform in concert at The Metropolitan Museum of Art on Friday, April 28, from 7 to 8:30 pm in the Grace Rainey Rogers Auditorium. Inspired by works of art in the Museum’s collection, the concert is titled “Reflections Through the Prism of Art and Music.” It will feature adult and youth musicians in solo, instrumental and ensemble performance. The actress Michelle Hurst, of the hit show “Orange Is the New Black,” will describe the art that will be projected behind and above the performers.

Alan R. Morse, JD, PhD, President and CEO of Lighthouse Guild says, “Art enriches and transforms our lives. It is important that people who are blind or visually impaired be able to access art in all of its forms. We are pleased to celebrate the 20th anniversary of our collaboration with The Met. We thank The Met for bringing people with vision loss into the mainstream offerings of the Museum.”

“This year’s anniversary concert will appeal to audience members irrespective of their vision status,” says Leslie Jones, Executive Director of Lighthouse Guild’s Music School. “The concert will enable all attendees to experience art in new ways.”

The program will showcase a wide variety of genres and styles representing students’ reflections on art and music and their own experiences. Selected poetry, written by the students, has inspired the choice of music and art. Music will include John Rutter’s “A Flower Remembered,” and Stevie Wonder’s “I Wish.” Projected images of art will include one of Joan Miro’s “Constellation” paintings, and Auguste Rodin’s iconic “Thinker.”

Among featured performers, all of whom are blind or visually impaired, will be a 10-year old musician, a professor of English Literature at Lehman College, a pre-kindergarten teacher, a creative writing major at Hunter College, a political science major at Fordham University and a professional jazz vocalist who is an alumnus of the music school.

“The Met’s twenty-year collaboration with the Lighthouse Guild’s Music School lies at the heart of our mission to make the arts accessible to people who are blind or visually impaired,” said Sandra Jackson-Dumont, the Met’s Frederick P. and Sandra P. Rose Chairman of Education.   “The Museum opens the world of art to people with visual impairments through descriptive and touch tours of original works of art, art making, and other multisensory programs, including the Lighthouse Guild at The Met concert. This inclusive event showcases the creativity and ability of the school’s musicians and singers through music, art, and poetry.”

About Lighthouse Guild
Lighthouse Guild, headquartered in New York City, is the leading not-for-profit vision and healthcare organization with a long history of addressing the needs of people who are blind or visually impaired, including those with multiple disabilities or chronic medical conditions. The Filomen M. D’Agostino Greenberg Music School, founded in 1913, is the only community music school in the US for people who are blind or visually impaired and is dedicated to helping individuals pursue their interest and study of music while addressing the challenges presented by vision loss. For more information, visit lighthouseguild.org.

About The Met
The Met presents over 5,000 years of art from around the world for everyone to experience and enjoy. The Museum lives in three iconic sites in New York City—The Met Fifth Avenue, The Met Breuer, and The Met Cloisters. Millions of people also take part in The Met experience online. Since it was founded in 1870, The Met has always aspired to be more than a treasury of rare and beautiful objects. Every day, art comes alive in the Museum’s galleries and through its exhibitions and events, revealing both new ideas and unexpected connections across time and across cultures. Through its website and social media accounts on Facebook, Instagram, and Twitter, The Met expands its visitor experience to people all over the world. For additional information about the Museum, visit www.metmuseum.org.