“The Sound of Music” Screening, Behind the Curtain Tour and Live Performances,

NEW YORK – United Palace, the stunning architectural gem that recalls the movie palaces of a bygone era, is hosting a series of blockbuster special events for adults and children of all ages on the weekend of May 6 and 7. The 3,400-seat theatre, located at 4140 Broadway at 175th Street in Washington Heights, originally opened in 1930 and is celebrating its past as one of the iconic “Wonder Theatres” with events that “Reawaken Wonder.”

Whether it’s a pre-Mother’s Day treat, date night, or a trip down memory lane to old New York, the United Palace is the place to reawaken your body, soul, and spirit. Here’s the weekend line-up.

First on the list of weekend activities is Obscura

Day 2017, a global celebration of exploration and

spots, and sharing them with the world. You will be taken back in time to 1930 as you tour the majestic United Palace and discover the magic of the movies that await you. From the Grand Foyer to the balcony, you will have the opportunity to view and explore all the nooks and crannies of one of the most ornate and beautiful theaters NYC has to offer. See Manhattan’s 4th largest theater and northern Manhattan's fastest-growing arts and cultural center up close and personal. This event is held in collaboration with Atlas Obscura.

Oshun
On the convergence of culture, politics, and art - OSHUN’s Thandiwe and Niambi Sala have chosen to march to the beat of their own drum. The D.C. natives have coined their own music style (Iya Sol) that is a cultural blend of neo-soul & hip-hop. OSHUN’s message of love, peace, cultural awareness and spirituality has been featured at the Brooklyn Hip-Hop Festival, Kennedy Center, Afro Punk, Brooklyn Academy of Music, NYU’s Clive Davis Music Institute, South by Southwest (SXSW), and B.B. King’s Blues Club in NYC to name a few.

Annette Aguilar and StringBeans
Annette has performed, toured and shared the stage with artists such as Stevie Wonder, Darlene Love, Tito Puente, Dr. Bernice Johnson Reagon, Toshi Reagon, Mose Allison, The Grateful Dead and many others. In 2007 she was a feature as an independent Hispanic artist for the Infiniti car commercial with fame late Cuban trumpet player Chocolate and Chef Douglas Rodriquez. In 1992 in New York City, she formed her band Annette A. Aguilar & StringBeans. The group was selected three times as Latin Jazz Ambassadors for the U.S State Department via The Kennedy Center and Jazz at Lincoln Center, where they traveled to Africa.

Harambee Dance Company
Harambee Dance Company pulls together the essence of African and African-American dance and music presenting it from an innovative and exciting new contemporary perspective. Artistic Director and resident choreographer Sandella Malloy has developed a high-energy repertoire that pulls together African-based movement, modern dance forms, live percussion and original music, and vibrant costumes into captivating performances reflecting the majesty of the African Diaspora. Harambee Dance Company incorporates the traditional and contemporary to create a new style of African Dance.

Sunday, May 7
Interfaith Inspirational Service
12:00 p.m. and on Live Stream
At the United Palace House of Inspiration (UPHI), we awaken the mind and spirit through transformation. As a center of universal spirituality, we celebrate the divinity within the individual, inspire the expression of love within community, and redirect the collective consciousness toward the light-led path. Service is free and open to all!

“The Sound of Music” and Sing-a-long with Broadway Stars
Adults: $10 online/$15 at the door
Children under 12/Seniors: $5 online/$10 at the door
Mom & Daughter On Stage Exclusive: $50 per couple
Event link here

4:30 p.m. Showtune Sing-a-long with Broadway Stars
Pre-show entertainment will include a sing-a-long and performance by Jasmine Cephas Jones who originated the roles of Margarita "Peggy" Schuyler Van Rensselaer and Maria Reynolds in the original Off-Broadway production of Hamilton prior to moving on to Broadway to continue in the roles. She received a Grammy Award in 2016 as one of the principal soloists on the Hamilton cast album.

5:00 p.m. Special Screening of “The Sound of Music”
Since Mother’s Day is around the corner, we’re screening “The Sound of Music” on our 50-foot screen to explore the wonder of moms. Rodgers & Hammerstein's cinematic treasure, "The Sound of Music" is the winner of five Academy Awards, including Best Picture. In this true-life story, Julie Andrews lights up the screen as Maria, a spirited young Austrian woman who leaves the convent to become a governess for Captain von Trapp's (Christopher Plummer) seven unruly children. Her charm and songs soon win the hearts of the children - and their father. But when Nazi Germany unites with Austria, Maria is forced to attempt a daring escape with her new family.

About United Palace
United Palace is a transformational organization and venue that fuses culture, spirituality, and entertainment. The fourth largest theater in Manhattan is more than just a unique venue — it is a hub of creative expression and personal growth designed with and for the community. It is home to the United Palace House of Inspiration (UPHI), a trans-denomination and all-inclusive spiritual center, and United Palace of Cultural Arts (UPCA), a nonprofit arts and cultural center that serves youth and adults across New York City and beyond with creative and educational programming. United Palace honors the building’s legacy as one of five Loew’s “Wonder Theatres” through concerts, multimedia productions, and movie screenings. 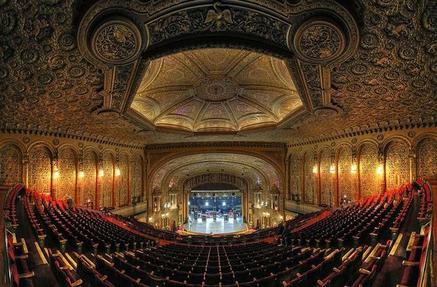